The mysteries of the crotch curve. After all these years, I still don’t have a firm understanding of this critical concept. I’ve been in another round of pants fitting (lost significant weight and it was time) and had an aha! moment about what I need in a curve and how it should be placed. Coupled with that, there’s been an interesting discussion going on at Stitcher’s Guild regarding this shape. These things motivated me to do a little tracing and comparing.

This would have been a better example if I had basic trouser patterns in all the pattern companies represented, but my Knipmode sources are limited to two magazines. Knip was critical because that is the curve that I really wanted to compare. So I selected the knip style that I had and then went on to find similar styles in the other companies – as close as I could.

Sizes – I used a 42 inch hip measurement – very close to the 106 cm measurement used by Knipmode and Burda. This meant that McCall and Vogue were size 18, Burda was a 44, and Knipmode was a 42.

Deciding how to align them for the overlay was a puzzle. I decided to align them based on the deepest part of the curve, with the grainlines parallel. For Knip and Burda, I positioned them so that the points were vertically aligned. I did the same for Vogue and McCall, too, but then backed them away a bit because they are designed to come together at the center of the body. The European cuts come together more towards the front. Maybe there is a better way to align for comparison?

So here is the picture. My lines are a little wobbly, but it’s easy to see that there is a clear difference in the four curves. 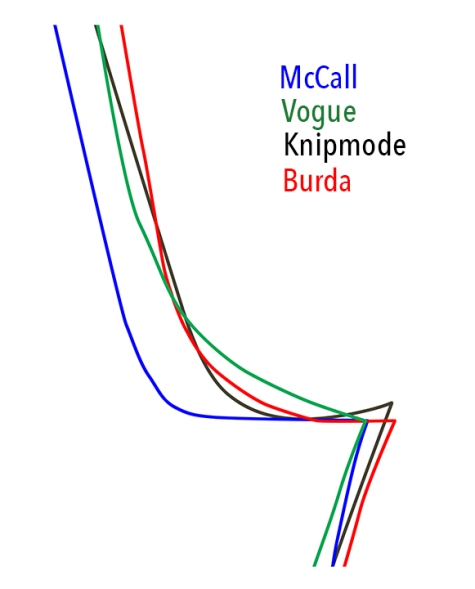 McCall and burda have almost the same angle of slant, but the McCall is much more L shaped.

Knipmode is the only one that has an actual hook. The lowest point of the curve is not at the point.

That Vogue curve is very shallow. When I look at it, I know why people need to scoop to alter some patterns.

Burda has a curve that I can imagine conforming to my contours. But look how the Burda seems to allow for a thicker waist than Knipmode.

There is more to fitting than crotch curves, of course, and that’s one of the reasons it is such a challenge for someone like me to understand. Side seams and the angle of the waistline relative to the center back and sides are also parts of the equation.

But what I understand from comparing these curves is that, depending on a person’s own anatomy, one of them would be a better starting point than the others. And you wouldn’t be able to just make the same kind of alteration across the board to get them to fit. One might need a scoop, another might need a wedge either added or taken out, and so on. In the most recent pair of pants I fitted (Burda), I tried tweaking in all the usual ways to get a better fit with no luck. Finally, I put them on inside out and pinned the center back to conform to my body. Turned out the curve needed to start higher.

I’d like to develop TNTs for a few more pant styles, so there are more muslins in the future. Here’s an exercise to add to your yoga practice…starting in mountain pose, twist to one side until you can pin the center back seam of your pants. This pose is called “the seamstress”.